In the statistics, we can see what the average percentage of voters would vote for, if the election were today. There is a majority of people voting for Biden from every source, but the difference between Biden and Trump voters is minimal.

On the issue of Privatization, Biden opposes vouchers because they aren’t giving all children a fair shot. Trump, on the other hand, describes vouchers as a shot to achieving the American Dream and he is also funding private schools.

On the issue of Public Service Loan Forgiveness, Biden wants more funding so educators don’t have to worry about paying their student debt while educating the next generation. While Trump is requesting the elimination of the program.

In the movie, we meet Maud Watts. She works at a cleaning factory in London. We get to see her attitude towards the women’s rights movement change from being indifferent, to being on the front lines fighting for her right to vote. The movie is based on and around true happenings that occurred during the time of the suffrage movement.

The movie painted a good picture of what it was like to be a woman in early 1900. Watching Maud live her life being harassed by her boss to losing her son is almost too awful to watch, but sadly this was the life of a woman at that time.

Emmeline Pankhurst was born on 15th of July 1858 and died 14th of June 1928, just weeks before the Representation of the People Act of 1928 was signed, where the vote was extended to all women over 21. Pankhurst is recognized for organizing the suffragette movement in the UK. She founded the Women’s Social and Political Union also known as WSPU. This was an all-women suffrage organization that was often in opposition to political parties in the UK. Emmeline Pankhurst was named one of the 100 Most Important People of the 20th Century by Time in 1999.

In the US we have the National American Woman Suffrage Association, also known as  NAWSA, which was led by Carrie Chapman Catt. NAWSA campaigned to get women in individual states to get the right to vote. They also lobbied the congress and the president at that time (Wilson), to pass a woman suffrage Constitutional Amendment. NAWSA was formed in 1890.

I think one of the biggest challenges the people who struggle with homelessness have, is feeling safe. It must be horrible to not know where you might end up sleeping or don’t have anywhere to sleep. Also not knowing if you’re actually going to wake up the next day.

I think the book “The Hate U Give” was a good “tool” for me to get insights on what it’s like to be an African American teen in the US today because it’s easier to understand a character in a book than to just watch the news where you’d only see it from an outside perspective. I liked how we got to know Starr personally throughout the book, with both her life at Williamson Prep and her life in Garden Heights. This made me connect more with her because it shows she’s just a regular teen with regular teen issues, and how that teen has to deal with the death of her childhood friend.

I found it disturbing how King (who is kind of Starr’s relative) tries to kill Starr because she stated that Khalil was a dealer. I found it most disturbing when he set fire to the store while she was in it, and stands outside the store and lights a cigarette to show that it was him.

By watching this documentary I’ve learned a lot about the issues regarding the prison system in the US. Like how different reforms and laws where made by the state to control people, or in this case African Americans. Like in the 13th amendment where if you’re convicted as a felon, you’re a slave of the state.

I got insights on what the situation around the mass incarceration issue in the US surrounding imprisonment of black men. Like how around 40% of black men have been to prison or are in prison, and how this is a serious problem connected to the 13th amendment.

Questions I still have after watching is: how can we change things and make them right? and what can I do to spread awareness and help out?

In the three first chapters in the book, we get to know Starr, her friends, and her family. We get to learn that she’s an outsider where she lives because she goes to prep school a 45-minute drive away. Also, her family doesn’t let her go out to parties in the area. But the one time she decides to go to a party, everything goes wrong.

Gunshots are fired and she and her friend Khalil runs to his car to drive away from the party. On their way back home a police car stops and pulls them over. Khalil tries to act tough towards the officer, the officer then decides to body search him, he finds nothing and tells Starr and Khalil to not move. But Khalil does when he is about to check if Starr is okay, and he gets shot three times. He dies instantly.

What stood out to me from what I read is that Starr and Khalil’s friend Natasha was also shot dead on the street, not by an officer but by a drive-by shooter. She died at only ten years old. It also stood out to me that there were quite a few bible references like “Suddenly I’m Eve in the Garden after she ate the fruit”. 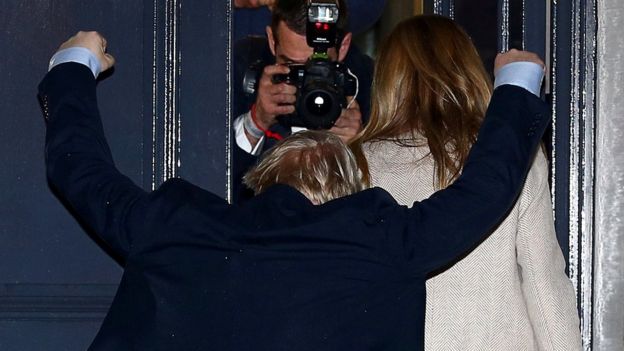 And the winner of the 2019 general election is… the Conservative party. (Shocking, at least to me). Boris Johnson got his clear mandate to go through with his plans for Brexit.

The labor party suffered a clear loss and Mr. Crobyn himself said in response that he is very disappointed with the turnout. He also said he will not lead the Labour party into another election again.

Mr. Johnson will continue to negotiate a good deal with the EU. And because of the results, he is empowered to see through whatever he sees fit to get his plans through.

The consequences of the results of this election could be that Johnson doesn’t think about his majority of people in the Brexit deals with the EU and he could also ruin the British economy.

Bernie Sanders is one of the candidates to run for president in 2020 for the Democratic party. He’s 78 years old and the former mayor of Burlington and was elected to the senate in 2006. he was also the runner up to Hillary Clinton in the 2016 elections.

He wants the people of the USA to get free medicare – a $15 minimum wage, tuition-free public college. This will be his second time running for president, and he is one of the most well-known candidates. But he is an outsider, in other words, a self-described democratic socialist.

A cause close to his heart that isn’t free medicare is eliminating tuitions at public colleges and universities. Mr. Sanders earned plaudits for his plan from his supporters, as well as from some in the education field. But other analysts were skeptical about its feasibility.

Sanders is now ranked as the 3rd most popular candidate on the democratic side with Joe Biden in 1st place.

“The only way we will win this election and create a government and economy that work for all is with a grassroots movement — the likes of which has never been seen in American history.”

The Supreme Court is the highest federal court in the United States of America and is also the head of the judicial branch of the government.

The Supreme Court was established in 1789 by Article Three of the US Constitution. The Judiciary Act of 1789 signed into law by George Washington, specified that the court would be made up of six justices who would serve on the court until they retired.

The first 10 amendments are:

Amendment 1 – Freedom of Religion, Speech, and the Press

Amendment 2 – The Right to Bear Arms

Amendment 3 – The Housing of Soldiers

Amendment 5 – Protection of Rights to Life, Liberty, and Property

Amendment 9 – Other Rights Kept by the People

Amendment 10 – Undelegated Powers Kept by the States and the People

The 13th amendment is the amendment that freed all slaves and indentured servants in the United States. It made it so the Congress should have the power to enforce this article by appropriate legislation. Section 1 of the amendment says: “Neither slavery nor involuntary servitude, except as a punishment for crime whereof the party shall have been duly convicted, shall exist within the United States, or any place subject to their jurisdiction.” The 13th amendment was passed through congress on January 31st, 1865.

The Constitution is the supreme law of the land. It established our federal government and defined our government’s relationship with the states and citizens. It controls the juridical branch of the American political system.

An important decision made by the supreme court is the Commonwealth of Massachusetts v. Mellon. This took place in 1923 and the case was that the 1921 Maternity Act gave states money for programs aimed to help mothers and their infants. A woman named Frothingham thought the act would lead to an increase in her taxes, so she tried to sue the federal government. The issue was whether a taxpayer had to stand to sue when the only injury was going to be an increase in taxes.

The Supreme Court unanimously held she did not have standing because the injury was too small and indeterminable. It led to the legal concept of a “particularized” injury, which needs to be traced to a legal violation. Without this decision, it would be a lot easier to take a suit to court.

In India 1 out of 5 Indians are poor. That makes 270 000 000 people. The poverty rates in India have caused the people many problems, like sending their children to work in factories, without really knowing what might happen to them. This is because many of the parents are illiterate. They don’t know that they are “selling” their kids to work in factories, they might have only been told they would be gone for a couple of months to half a year, and then they never return.

In the film “The Price of Free” we meet the Nobel peace price winner Kailash Satyarthi. He got this price because of his work freeing children from working in factories. He says that making a child work, robs him/her of their childhood. He works also to punish the traffickers who takes the children from their families.

His work has rescued many children and reunited them with their families, but he says it isn’t enough because there are still children working in horrible conditions. No matter how many he saves, there will still be children robbed of their childhood.